Above: Elkhart Tavern is situated on Old Wire Road in Pea Ridge National Military Park. Before Old Wire was associated with the telegraph, it was used by the Butterfield Overland Mail stagecoaches on their route.

Elkhorn Tavern sits along Old Wire Road in Pea Ridge National Military Park in northwest Arkansas. According to the National Park Service, the battle fought at Pea Ridge was the most pivotal Civil War battle west of the Mississippi River and Pea Ridge is one of the most intact Civil War battlefields in the United States.

According to Roscoe and Margaret Conkling, authors of The Butterfield Overland Mail, 1857-1869, the definitive work on retracing the Butterfield stagecoach road and published in 1947, Elkhorn Tavern was established directly on the old post road nearly two decades before the advent of the Butterfield. It was a popular stopping place for travelers and the stagecoaches would stop there to take on or discharge passengers, but the tavern was never reported as a Butterfield station.

The first log tavern was built by William Reddick around 1834 and he adorned it with an enormous pair of antlers from an elk killed by a neighbor. During the Civil War the tavern was burned, but was rebuilt soon after the war’s end. During the war the antlers had been removed and sent to New York City but were later recovered and, when the Conklings visited in the 1930s or 1940s, the elk horns adorned the gable of the tavern. After the acquisition of the site by the National Park Service (NPS) in 1960, the structure was restored to its approximate wartime appearance. According to the NPS, the present building is a reconstruction; elk horns still adorn its gable but whether they are original is unclear.

I first visited Pea Ridge and Elkhorn Tavern more than 40 years ago. At the time, I would have learned that prior to the Civil War and the extension of the telegraph line through the area, the road known as “Old Wire” was used for the Butterfield Overland Mail stagecoach road. But the information about the Butterfield didn’t mean much to me then. I was, however, fascinated with the history of the place and recall reading Douglas C. Jones’ historical novel, Elkhorn Tavern, with great enjoyment.

For the past 20 years, my parents have had a home on Beaver Lake just a few miles from Pea Ridge. I’ve been back to Pea Ridge several times for casual visits. In the past four years I’ve begun to make the Butterfield Overland Mail stagecoach road in Indian Territory a focus of my research and writing, but it hadn’t occurred to me before now that the Arkansas segment of the Butterfield was right in my own back yard. Our route back and forth from Oklahoma to visit my parents runs very close to the Butterfield trail and the northernmost segment of the stagecoach road is within minutes of their house near Garfield.

This year (2019), Bill and I were visiting the lake for July 4th and on our way we picked up a segment of the Butterfield on the north end of Rogers, where it is named Arkansas Street. As it runs north along the east side of the railroad tracks, it becomes Old Wire Road. We diverged from the Butterfield at Avoca, but later in the holiday I had a bit of extra time, so I took my mother, Jane Morgan, along with me to drive the segment north of Pea Ridge battlefield.

From Highway 62 in Garfield, we took Alvin Seamster Road north. This road runs along the eastern perimeter of Pea Ridge National Military Park and becomes an unpaved road as it turns west, then curves northwest to connect with Old Wire Road, which was the Butterfield road. The canopied dirt road provides a pleasant tunnel of time travel, and it was easy to imagine meeting a stagecoach coming up the hill as we dropped down into the hollow. We soon reached the Missouri border (because it is just 3 1/2 miles from Elkhorn Tavern to the border) and found the marker for Potts’ Hill, where a skirmish on February 16, 1862 marked the beginning of the Pea Ridge campaign. We turned around and drove back toward Highway 62, now realizing we were in the ten-mile long Cross Timber Hollow mentioned on the marker, also referred to as the “narrow little valley of the south branch of Big Sugar creek” by the Conklings. This stream is now shown on maps as Little Sugar Creek. Back at the Pea Ridge battlefield, we took the scenic loop around the park, part of which is on Telegraph/Old Wire Road. One stop marks the route of the Trail of Tears, which followed Old Wire Road here. The trace of the old path is still visible through the forest, but July is not the time to explore the woods of Arkansas. Chiggers, ticks, and poison ivy make that something a prudent person would likely avoid. And I am generally a prudent person (though some would argue the point). 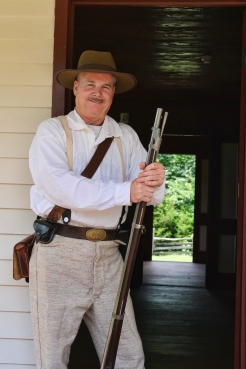 Likewise, there is a hiking trail extending north from Elkhorn Tavern on the Butterfield road but exploring that must wait until fall or winter. Elkhorn Tavern itself has recently been refurbished and opened to the public. A historical interpreter named Vic told us about the building, including the fact that the fireplace on the south end is, he said, original. Fleur de lis on each corner of the stone fireplace indicate it was brought from Saint Louis, he added. The next day as Bill and I left for home, we drove another segment of the Butterfield on Old Wire Road, starting just west of the national military park and turning south off Highway 62. There are a couple of places signed “Old Wire Road,” but one of them is a dead end. Highway 62 was recently re-located, creating some disconnects in the old road. The Old Wire Road west of Battlefield Road is the proper turn, and we drove southwest there, intersecting Sugar Creek Road briefly, where we came upon an impressive stone train trestle over Little Sugar Creek. Old Wire Road connects to Sugar Creek Road again just to the west, and continues to Avoca, going through another railroad bridge, this of 1920 vintage, on the way.

I’m eager to see more of Arkansas’ segment of the Butterfield Overland Mail road which, unlike Oklahoma’s segment, is actually on my way to somewhere. How convenient.