Concertina wire draws my gaze away from the lenticular clouds shifting from flying saucers into mother ships in the western Oklahoma sky. We’ve been driving northwest from Woodward on Highway 270 looking for Fort Supply, and we should be there by now. The fence topped with razor wire clearly indicates we are approaching a prison, but where is the fort? Finally we distinguish the sign for the Fort Supply Historic Site, almost lost amid the prison barrier and institutional buildings. We are greeted by armed guards when we turn in, and muddle through an explanation about being with the Oklahoma Historical Society’s annual conference and wanting to visit the historical site. They don’t seem to be expecting anyone, although a large bus full of conference-goers will soon follow. The four of us — me, my husband Bill, and my parents Jane and Jack Morgan — have come separately by private car.

Winding through a maze of buildings of uncertain purpose we find the parking lot for the historic site and there we do indeed seem to be expected. Two friendlier-looking men greet us as we get out of the car. Site manager Shayne House and Mead Ferguson, president of Friends of Historic Fort Supply’s board of directors, are a contrasting pair. Mead is slight, white-haired and gregarious and Shayne a dark-haired, bearded young man originally from Hawaii, but both are full of knowledge and enthusiasm about the place we are here to see. A young woman is sweeping out the entrance to the guard house as we approach. They may not get many visitors.

Originally named Camp Supply, the military installation 13 miles northwest of Woodward, Oklahoma was established in late 1868 as the supply base for Major General Philip H. Sheridan’s winter campaign against the American Indian tribes of the southern Great Plains. From here Lieutenant Colonel George Armstrong Custer and the U.S. Army Seventh Cavalry marched south and destroyed the Cheyenne village of Chief Black Kettle at the Battle of the Washita on November 27, 1868. For the next 25 years the site served as a base for soldiers patrolling the region in an effort to contain the tribes and keep out trespassers. Fort Supply was closed in 1894 and its grounds have since been used for the state’s first mental hospital and a minimum security correctional facility, whose ominous fence it was that caught our attention. 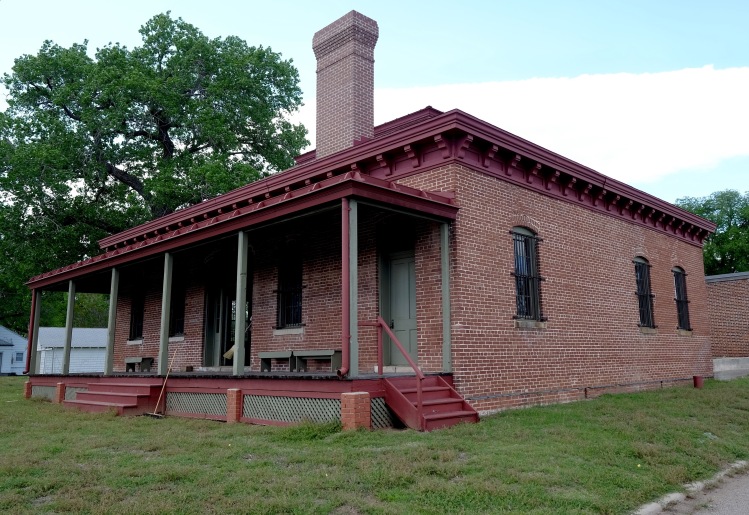 They’re expecting the bus to arrive at any time, and House and Ferguson seem to feel a bit constrained, needing to be here to greet it but also wanting to show us around. Not getting too far afield, our small group wanders through the 1892 brick guard house, the only brick building erected here by the army. It is clean, pleasant, and feels spacious in spite of the barred windows on the room reserved for military prisoners and the two dark closets for solitary confinement. A few artifacts are displayed in an adjacent room and we notice a bathroom with surprisingly modern toilets and a large tub. 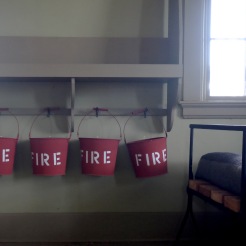 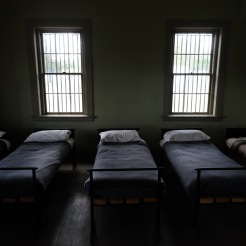 I want to get outside and shoot photos of other buildings, so I start to wander off. Ferguson goes along with us to the 1882-era teamster’s cabin, the oldest building on the site. It is a rare example of a common frontier construction method, with walls built of vertical cedar logs. 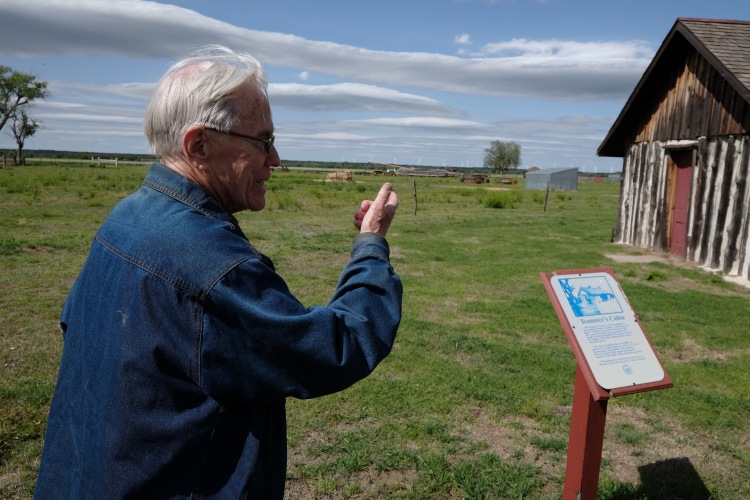 Then it’s off to the stockade, with House in tow. The stockade is a replica but we are told it provides a good idea of what the original might have looked like, and its blacksmith shop appeals to Bill and Jack, where they get an educated mini-lecture from House on the artifacts there, including an anvil and forge. 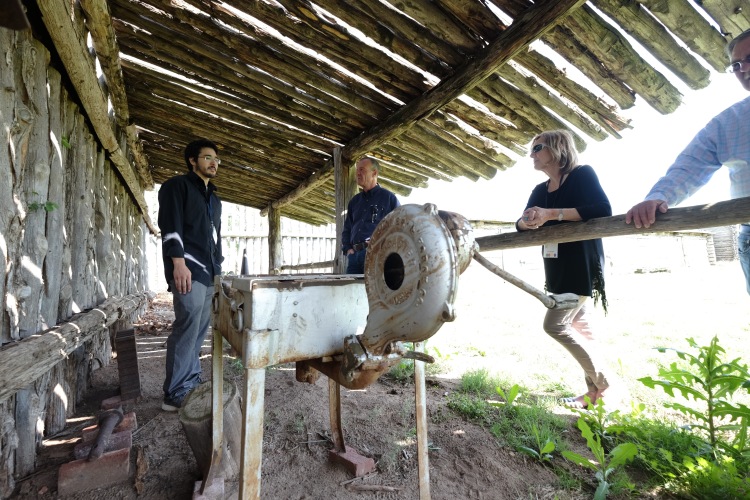 Next Ferguson leads us over to the 1879 commanding officer’s quarters, a large wood frame house with a long veranda facing the former parade grounds, now the prison yard where inmates stroll on a path that circles the yard. The house is surprisingly well preserved for a wood structure of that era and is in the process of being repainted. Ferguson says Sherwin-Williams had a hard time coming up with the proper green for the paint needed to restore the house to its original color. Not surprising. Bill notices the float.glass in the windows, a sign that the windows are old, if not original.

We head for the car, ready to get back and prepare for an evening event, and just then the bus arrives.The large group had toured a wind farm before coming here and will probably have to settle for a shorter version of the private tour we just enjoyed. Good timing on our part.

Fort Supply was officially closed in September 1894 and was turned over to the Department of the Interior on February 26, 1895. In May 1908 the first patients arrived at the Western Oklahoma Hospital, which used the old post’s buildings and grounds as the state of Oklahoma’s first mental health facility. The Oklahoma Historical Society currently administers five structures and a replica stockade as the Fort Supply Historic Site. The grounds of the old post are also occupied by Western State Psychiatric Center and William S. Key Correctional Center. The Fort Supply Historic District was listed in the National Register of Historic Places in 1971 (NR 71000675).