The latest issue of Oklahoma Today (September/October 2016) features my article, “The Great Golden Way,” which tells the story of a trail that crossed Oklahoma in the 1800s, the California Road. It began in Fort Smith, Arkansas and carried fortune-seekers to Santa Fe, New Mexico on their way to the gold fields of California, starting in 1849. Wagons traveled more than 400 miles across Indian Territory in the course of the journey, following the south bank of the Canadian River (or the “South Canadian River,” as we know it locally . . . the “North Canadian River” is actually the northern branch of the Canadian).

Go to OklahomaToday.com to subscribe or pick up a copy on newsstands now.

Remnants of the trail are still evident today and Art Peters, curator of the Hinton Historical Museum, has spent the last decade retracing the wagon road through western Oklahoma. In the past few years he has also been placing markers on the trail.

Over time his exploration has yielded numerous artifacts. Even after the Gold Rush, the road was used for many years, probably until around 1918. Wagon hardware, buttons, tableware, and many other metal objects have turned up in Peters’ excavations and they are on display at the museum, located at 801 S. Broadway in Hinton, just north of the entrance to Red Rock Canyon. (Red Rock Canyon is the only place on public property in Oklahoma where a California Road wagon rut is evident and can be easily visited.)

Four of the artifacts Peters has recently found are pictured below, with some details written by Peters about each one. (Artifact photos by Art Peters.) See these and much more at the museum. For more information, call (405) 542-3181 or go to Hinton Historical Museum

Peters: The padlock is from the 1901 – 1915 time period and the flat-style key it took was a very common thing at that time. I’ve found old trunk locks before that took the same small-style key. I found the lock several yards to the south of a trail campsite near Leedey. I don’t know if the word Patrol means anything more than a brand name or if these locks were meant to lock strong boxes on stage coaches, but I think it was very possible. Movies always show a massive railroad lock, as big as the palm of a hand, being shot off by the outlaws, but in reality they used anything that was handy and would get the job done. 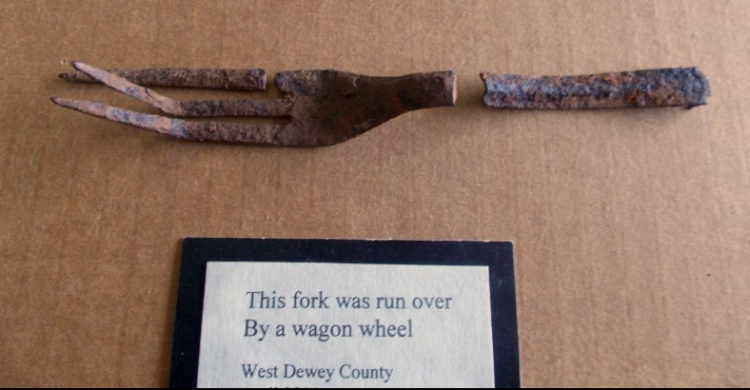 Peters: The fork is from the same campsite as the padlock. Two of the tongs are still holding the shape of the imprint from where a wagon wheel ran over it. The third tong and handle were broken off from the force of being run over. On the reverse side of the handle there are two small hooks, located at the very outer edge, resembling snake fangs, that show us this fork was originally attached to a ring and was part of a “camp set.” But it is uncertain if the “camp set” would have been something the average wagon traveler could have purchased at a trading post or in Fort Smith before heading out, or if it could have come from a military outfit leading the wagon trains or passing through on a different expedition. In the same campsite I also found a long thin flat piece of metal shard I think could have been a cheaply made knife blade body, missing its base and point, but can’t be sure it was part of the same set.

Peters: The cast-iron stove foot was found in a wagon train campsite west of Hinton. I recently found more cast-iron stove plate shards, which equal about one-third of a complete stove-top, top-plate, and part of the top surface rim, which indicates it was a cook stove and not a pot-belly stove. When the wagons were entering this campsite they had just pulled a hill leading them here, and it was during that uphill pull that the wagons would have begun moaning, groaning and creaking under the stress of the pull. This is also the time when wagon brackets and horse harness would break, and men would come to realize their wagons were too overloaded to carry on. Therefore items such as cast-iron stoves and grandfather clocks would have been unloaded to ease the stress the animals and wagons were undergoing. When I think about this old stove foot and the complete stove it came from, I can imagine a conversation between a man and wife on the trail who has just had a horse harness or wagon part break as they approached the top of this hill. If the man is polite to his wife it would go something like this. “Honey you know I love you, but we just can’t take the stove any farther.” Then seeing the broken parts for herself, she would obviously agree to discard it. 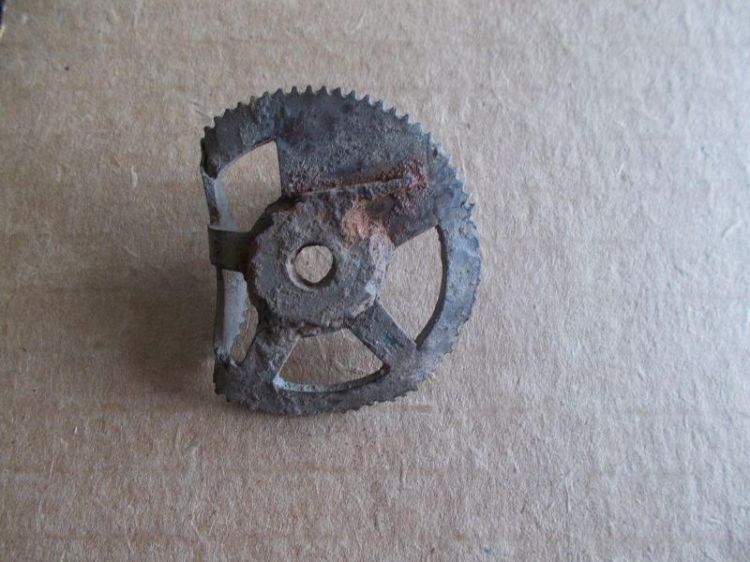 Peters: One item I had not given much thought to until a friend mentioned it, is a badly oxidized flat gear about the size of an old silver dollar. It is bent on one edge and has a small pointer on one flat side. I took it to a clock repair shop and the lady there, before I told her about my work, said it was from a mid to late 1800s grandfather clock and the small pointer was the striker that releases the chimes every half hour. It fits the time period perfectly and those old clocks were heavy and if broken in route, it may have been discarded in the camp.

3 thoughts on “Found on The Great Golden Way”